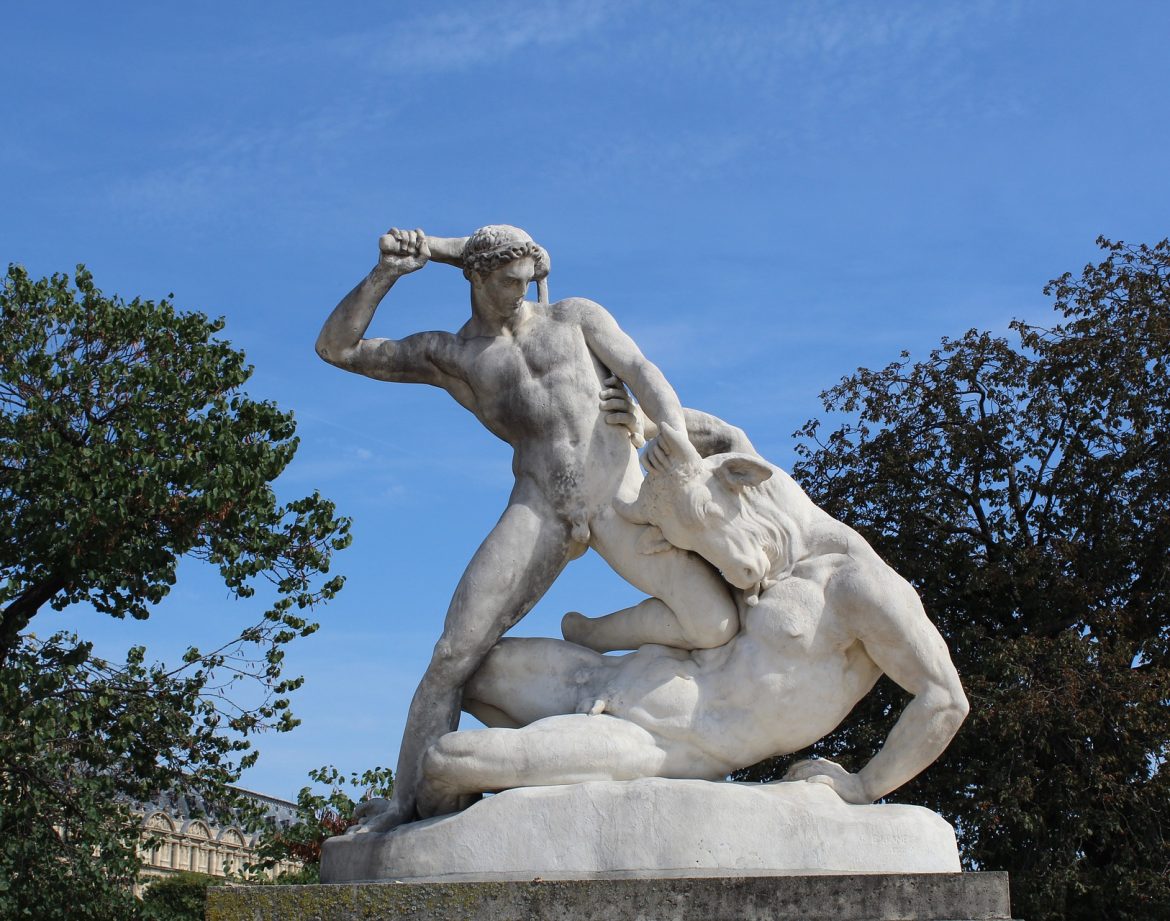 The Myth of Theseus and the Minotaur

Published on 5 November 2021 by villasincrete

One of the most tragic and fascinating myths of the Greek Mythology.

Once upon a time, Hercules passed through Troezen of Attica where he was hosted by Pittheus. As they were having a meal, Hercules took off his lion coat. A group of kids nearby though it must be a real lion and so they ran away scared, all of them but one, a seven year old kid who grabbed an axe and went for the kill. That kid was Theseus the grandson of Pittheus.

Theseus was born to his mother Aethra after her father got Aegeus drunk and made him sleep with her in hopes of having a grandson as the eventual King of Athens.
Upon Aegeus awakening next to Aethra, he told her that if she were to have a child she ought to raise him in secret. Aegeus also hid his sandals and sword under a large rock explaining to her that when the boy would be old enough to lift the rock she had to guide her son to bring the items back to him in Athens. That same previous night Aethra dreamed of Athena advising her to go for a walk to the sea and so she did. As she waded across to the island of Sphairia, it is said that she was possessed by Poseidon that way giving Theseus a double paternity and giving him a combination of divine as well as mortal characteristics.

Before Minos became king, he asked Poseidon for a sign to prove that he, and not his brother, should ascend the throne. The god sent a beautiful white bull and asked Minos to sacrifice this bull to him. But Minos sacrificed another bull instead, hoping that the god would not notice. But Poseidon realized what had been done, became enraged, and made Minos’ wife Pasiphae fall in love with the bull. From this union the Minotaur was born. Minos, following an oracle he received from the Oracle of Delphi, asked Daedalus for a way to enclose the Minotaur, and so he constructed the Labyrinth.

At the end of Theseus’s teenage years, his mother told him of his origins. Theseus went on to lift the rock and recover his father’s items determined to travel to Athens and claim his birthright. When Theseus arrived in Athens, he did not reveal his true identity immediately. Aegeus gave him hospitality but was suspicious of the young, powerful stranger’s intentions. Aegeus’s wife Medea recognized Theseus immediately as Aegeus’ son and worried that Theseus would be chosen as heir to Aegeus’ kingdom instead of her son Medus. She tried to arrange to have Theseus killed by asking him to capture the Marathonian Bull, an emblem of Cretan power. When Theseus returned victorious to Athens, where he sacrificed the Bull, Medea tried to poison him. At the last second, Aegeus recognized the sandals and the sword and knocked the poisoned wine cup from Theseus’s hands. Thus father and son were reunited, and Medea fled to Asia.

Meanwhile, Minos, now a king, had declared war to Athens after the Athenians killed his son Androgeus, a war which he won. Following the war, he imposed a penalty where every nine years King Aegeus had to send 7 Athenian young men and 7 young women to the labyrinth, where the Minotaur would devour them. Theseus angered by these conditions decided to take the place of one of the young men and so he set sail for Crete with black sails and told his father that if he returned with white sails it would mean that he was successful in his mission, however if the sails had remained black it would mean that there was grief on board.

Upon his arrival on Crete, Theseus met Minos’s daughter, Ariadne who fell in love with the brave man. When the fateful day came Ariadne, on the advice of Daedalus, gave Theseus a ball of thread, so he could find his way out of the Labyrinth after facing the deadly Minotaur. In return Theseus promised that if he survived he would take her back to his home, Athens, where they would wed.

As soon as Theseus entered the Labyrinth, he tied one end of the ball of string to the doorpost, he followed Daedalus’ instructions to always go forwards and down, never to the left or the right. Theseus finally arrived at the heart of the Labyrinth where he found the Minotaur asleep, which would not be for long as the beast awoke and a tremendous fight then occurred. In the end the man managed to slay the monster by stabbing the Minotaur’s throat. Following the thread he had left as he was coming in, Theseus managed the impossible and exited the labyrinth. Taking advantage of the nightfall, Theseus took Ariadne and the rest of the young Athenians to the port where they found their boat.

On their way back they made a stop to Naxos where Theseus had a dream where God Dionysus told him to leave Ariadne on his island as she was went to be his wife.
Once again departing, this time without Ariadne, Theseus set sail for Athens.
Upon arriving, Aegeus was watched as Theseus’s boat approached from cape Sounion, but as nobody had remembered to change the color of the sails to white, Aegeus, in a moment of madness jumped down into the sea, to his death, thus giving his name to the Aegean Sea while Theseus went on to become the King of Athens.

Today you can visit the Knossos Palace where beneath it, according to the myth, lays the famed labyrinth in which the Minotaur was slain.